The creative process can be marvellous and mysterious, frustrating and demoralising.  Occasionally something magic happens with a drawing and a work takes a whole new direction, one which was not planned but is very much welcomed.  These are the works I think of as the turning points in my progress through drawing – the ones which spark a series, or through which a new working method develops.  They act as landmarks showing me where I’ve come from and suggest routes forward too. 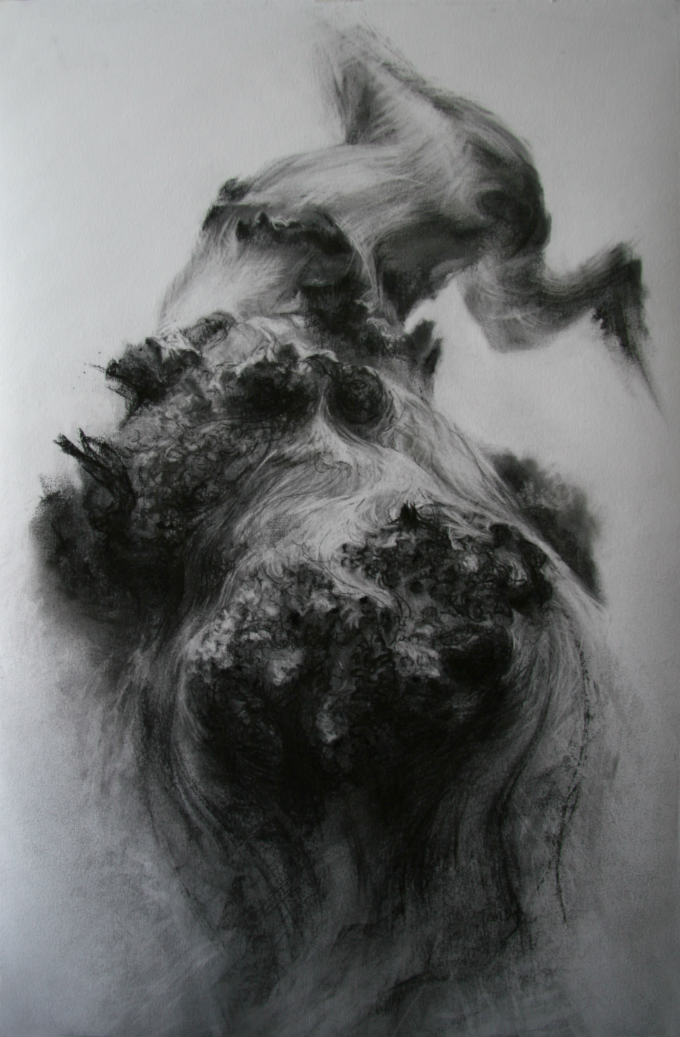 This is the most recent turning point which I completed earlier this year.  Inspired by a dead oak which I found on my very first visit to Dalkeith oaks in 2005, photographed then subsequently ‘lost’ amongst the hundreds of trees there.  I’m usually pretty good at finding my way to the particular tree I’m looking for, but this one eluded me.  Thankfully I found it again this spring and I fell in love again with the barkless surface and its contorted burred forms.  There are six works in the series so far and more to come I think. 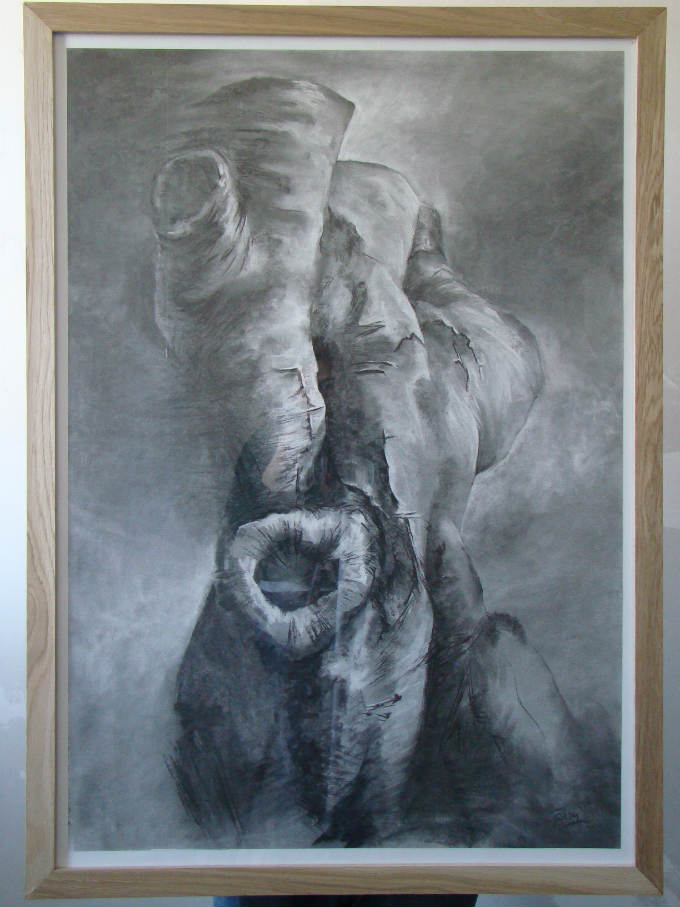 A major leap forward occurred in 2009, when I was shocked to discover a favourite roadside beech had been beheaded, leaving the torso like trunk starkly exposed. Up to that point I had been wrestling with the problems of what to leave out when drawing trees – the complexity was overwhelming and details seemed to obscure the essence of the thing.  When I saw this devastated tree I realised that the chainsaw had revealed what I was searching for and inspired my ongoing torso series in charcoal. 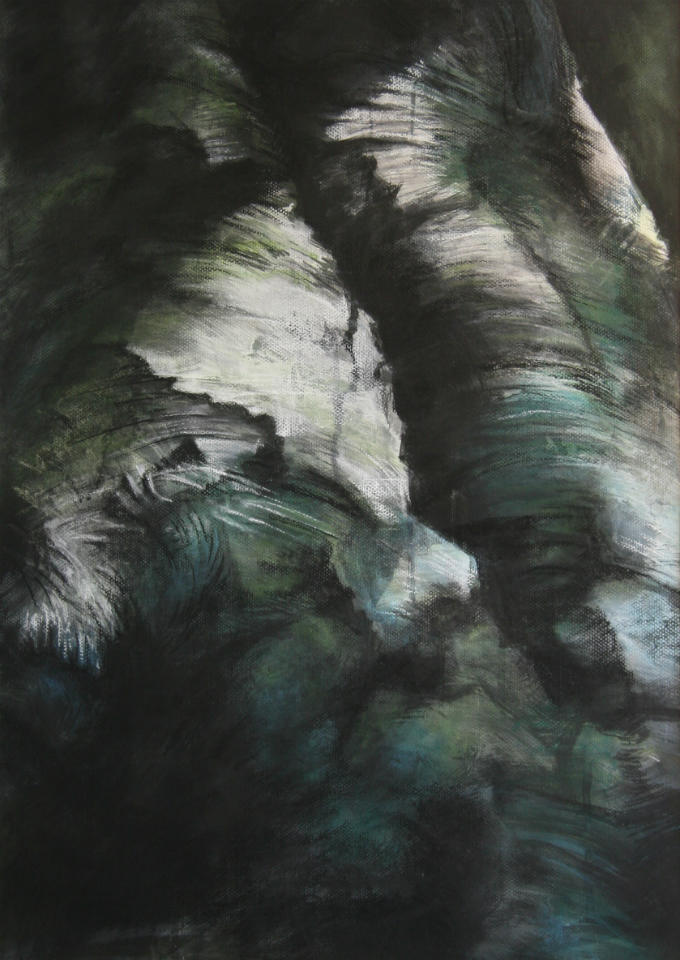 A really old one, done at the end of a drawing course at ECA, around 2005.  I decided to try zooming in on the light and texture of the tree’s surface and just really enjoyed the mark-making aspect of the drawing.  I hadn’t picked up a soft pastel in years and it felt like quite a liberating piece of work at the time.

It’s titled 1973 because of the date carved into the stump – a massive and somewhat incongruous chestnut by a path in an area of former quarrying.  I guessed that the date related to the time it was felled – there’s also a partial cut on the stump which might have been made at the same time.  It was such an odd sight and so sculptural that I decided to draw it ‘in the round’, to give the sense of walking around the tree.  After making initial sketches I developed a method of working on a scroll of rolled paper on a wide board, and returned with my new kit to make this drawing.  This 360 degree approach has continued to develop, the piece below being a more recent example.

The tree lives on incidentally, with young branches sprouting from the base, producing sweet chestnuts every autumn. 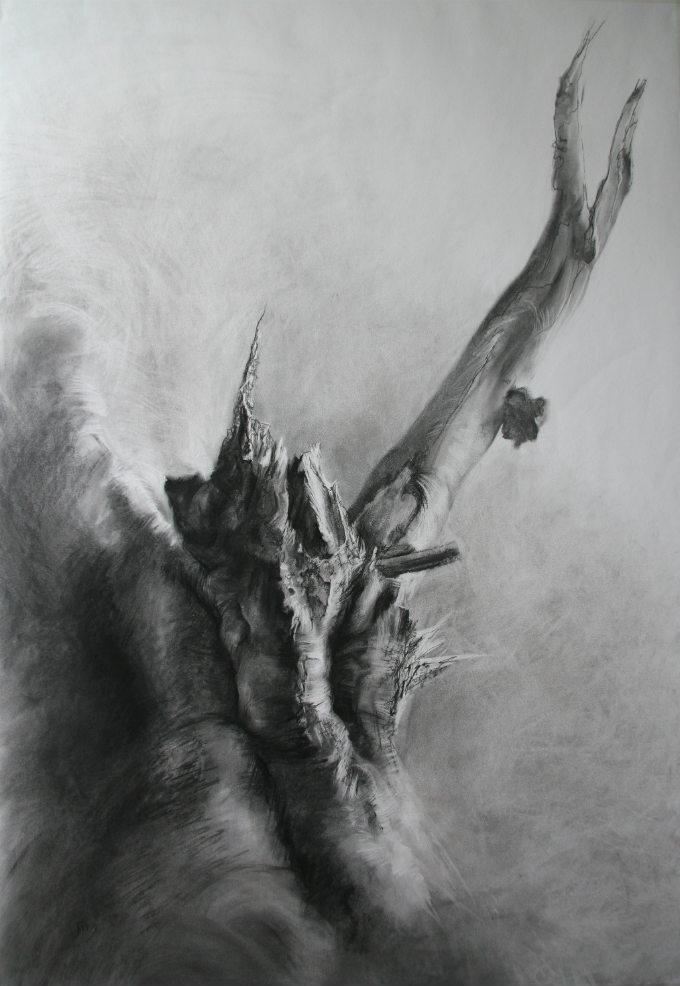 I had this image in my head and an urge to draw big, so cut myself a piece of paper 1m x 1.5m and got stuck in.  It’s really not that practical – it’s unframed and tricky to move around but I had a great time making it.  I felt as though I had room at last to do the tree justice.  One day, when I have plenty of gallery space to fill and ample funds for framing, I shall make more on this scale. 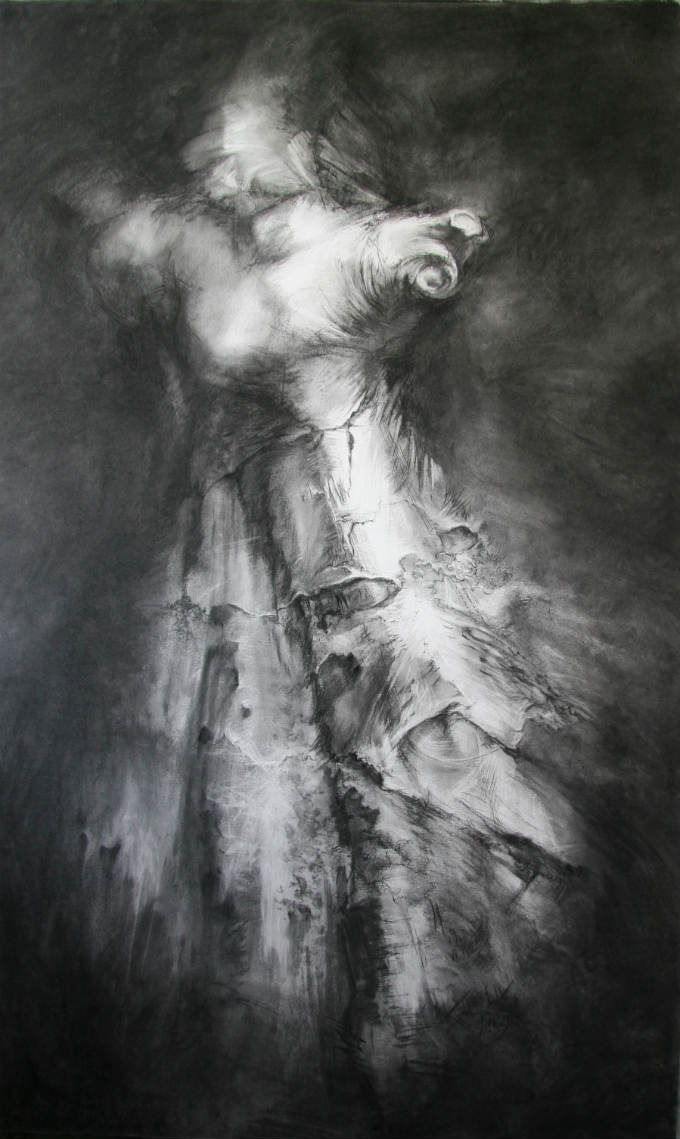 “How dark can I go?” I wondered.  Here I began to push the amount of charcoal I could apply to the paper and the ways in which I removed it too.  Randomness was encouraged and responded to, the image allowed to emerge.  Something ghostly appeared on the paper and I liked it – it had a combination of drama and subtlety which has featured in all my later charcoals.

I think of drawing as my method of discovery and these are some of my landmarks so far, each turning point leading to new and unexpected territories.