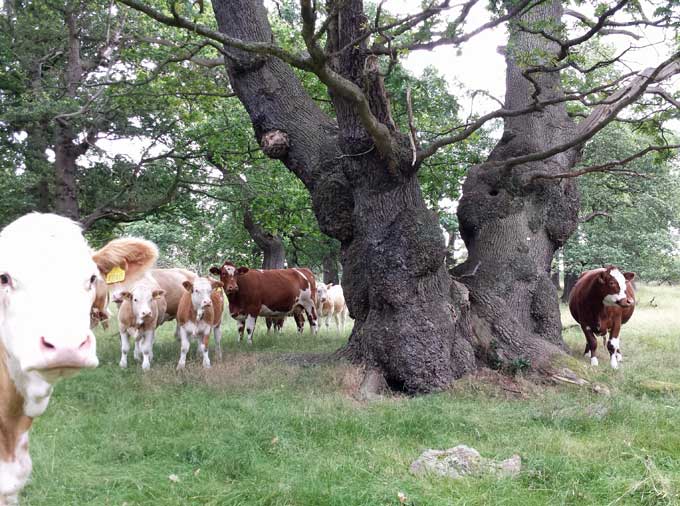 It sounds idyllic €“ €œI€™m going out to the woods to draw today€ and the truth is that it really is, it€™s a very special thing to do.  If I didn€™t have those days alone with the trees there would be no art, since the place, the atmosphere, the wildlife, the weather all contribute to the eventual response I make on paper.  The sound of the buzzards above, a deer looking startled as it almost bumps into me, a crow flying out of a hole in an old oak at eye level, a strong breeze making the dead wood creak over my head, the intermittent rustle of a toad hopping through the grass €“ all these form part of the experience for me.

However, drawing outdoors can have its little excitements and challenges too.  There are the predictable things like rain and wind, cold and midges. And the bugs that insist on walking on my drawing and sometimes refuse to leave, sadly getting squashed as I roll it up.  Nettles can make summer drawing unpleasant. High winds mean dangerous conditions underneath old trees and I€™m cautious on those kind of days.

On my last outdoor drawing trip I encountered some very inquisitive cattle which threatened my carefully selected drawing spot.  It seems quite funny to think of a grown woman escaping from cows, but they can do you some serious damage, especially if they have their calves to protect. 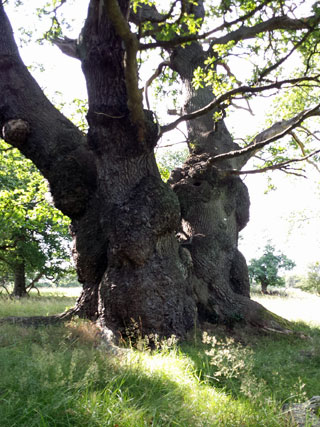 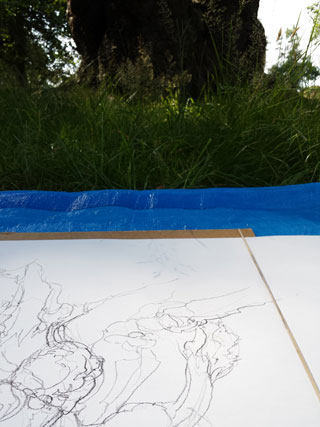 I€™d set out to do a full 360 drawing of one of the hugely impressive Dalkeith oaks, which will be on show at €˜Time around trees€™ at the Meffan Gallery soon.  I€™d come prepared with little tent peg flags to mark my eight viewpoints, a tarp to sit on, my board, and a three and a half metre scroll of my favourite Canson paper.  This was going to take most of the day so I took my time deciding on views, thinking about the movement of the sun through the day and doing the initial sketches.  Four drawings in and I was happy with my progress until I noticed the herd moving towards me. The calves were at the €˜bolshy teenager€™ stage of their lives and clearly up for some mischief, so I rolled up the drawing carefully, packed my bag and climbed over the fence. 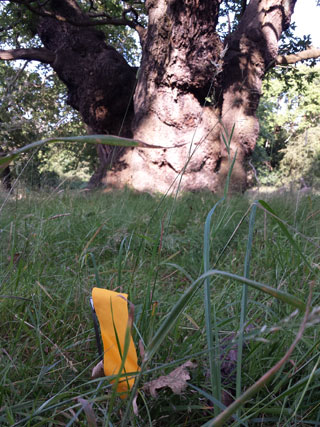 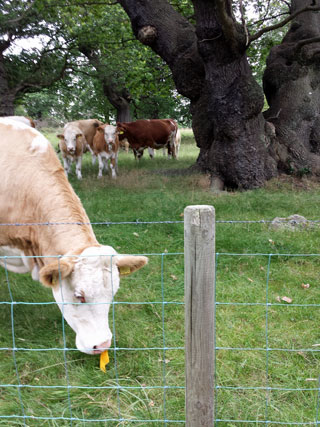 They had a good look round the tree and over at me, then settled in for some leisurely grazing, so I went for a walk and eventually tagged along with a group being given a tour by the woodland manager.  After a pleasant break I returned to my now deserted tree and resumed the big drawing.

An hour or so later they were back to play, but this time moved much faster and more determinedly so I only had time to get the drawing and pencils to safety and had to leave the tarp and board. 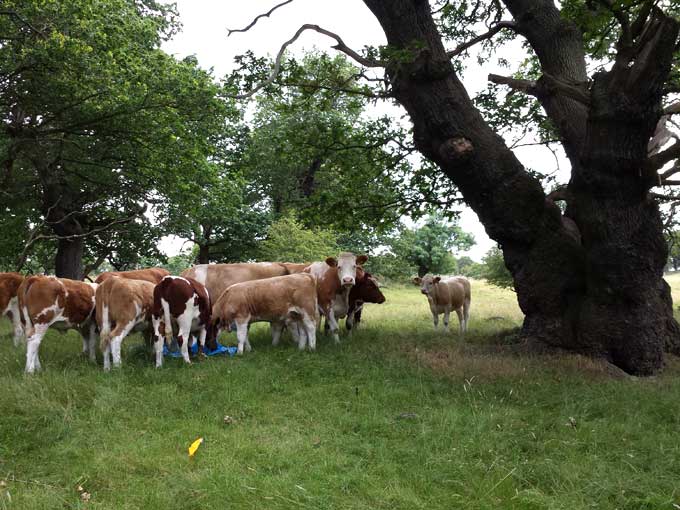 You€™re supposed to put your arms out wide and shout to keep them away but they weren€™t having any of that €“ no amount of arm waving was going to put them off their fun. The youngsters had a great time tossing the tarp around and slobbering all over my board, while their mothers rubbed themselves against the tree and had a good sniff around.  I realised from the other side of the fence that I was witnessing an age old scene of traditional wood pasture, and wondered how many woodsmen had been held up from their work by marauding cattle in the past! 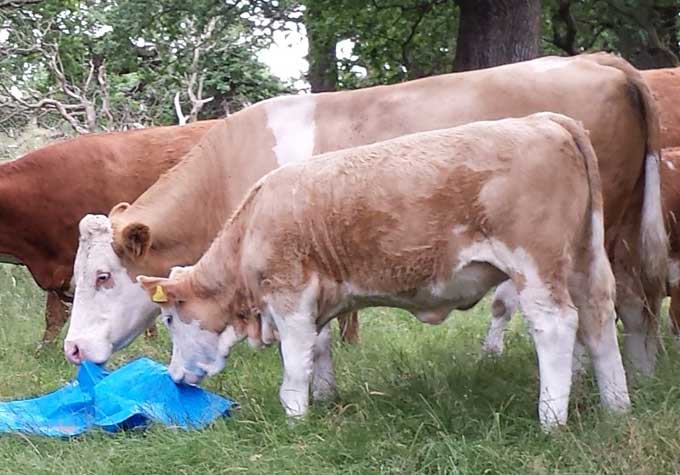 I ended up hiding behind a holly until they got bored and moved on.  Ok, I know it’s hardly Olly Suzi and wild dogs, but my tent peg flags were soggy and trampled and my board and tarp unpleasantly slimy. Still, I was happy that my drawing remained intact and I managed to finish all eight views with the occasional glance over my shoulder to check I was alone.  I took my longest ever drawing back to the studio, cleaned off the bug bodies and trimmed it ready for the Meffan show next month.  I’m hoping to be able to hang it so it kind of envelops you as you view it – so I hope you can come and see it for yourself now you know its story. 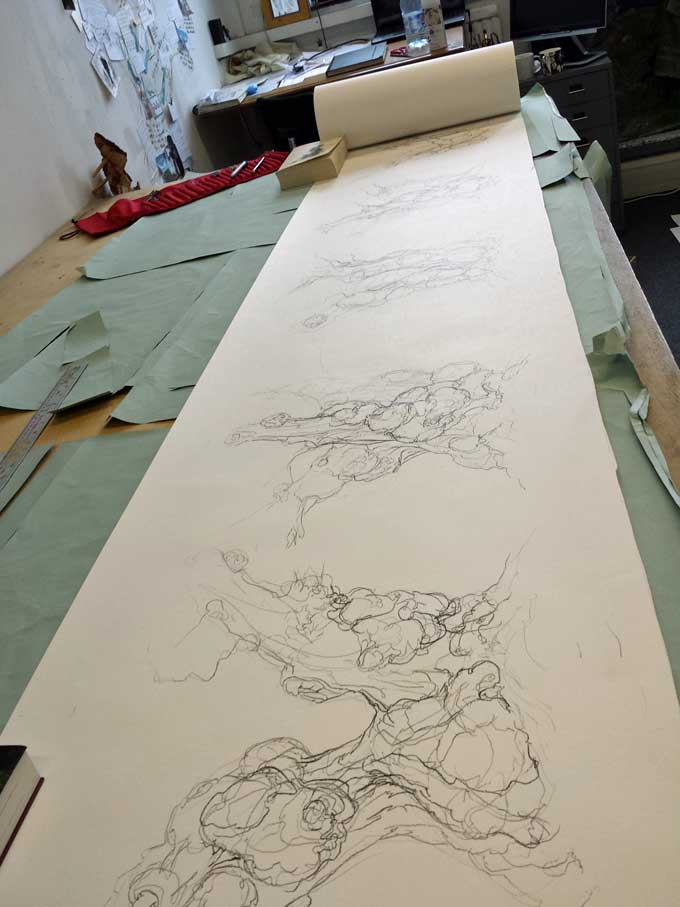 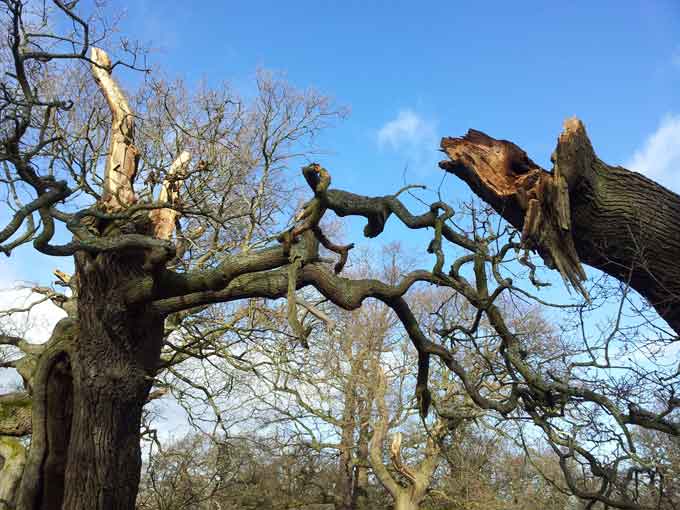 Words probably won’t add much here, but just to give a little context, this is an oak on the Dalkeith Country Park Estate, in a large area of ancient wood pasture which was once a deer hunting forest.  The wood continues to be used for cattle grazing but is managed for conservation – this tree has broken in half very dramatically, but the dead wood will not be cleared away or otherwise tidied. Instead it will be allowed to slowly decompose and provide habitat for countless millions of other organisms as it does so.  Not to mention also providing both shocking and endlessly beautiful subject matter for freezing artists in the winter months.

It won’t be long till the leaves are out and the nettles are up, so I’m taking every opportunity to get out drawing at the moment. 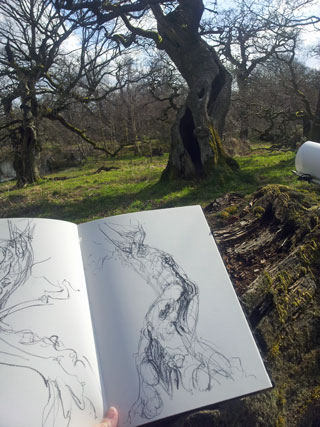 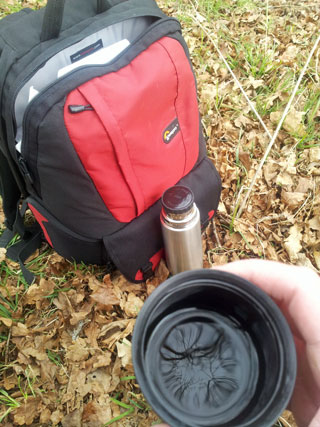 A few warm up sketches and some hot coffee to get started. 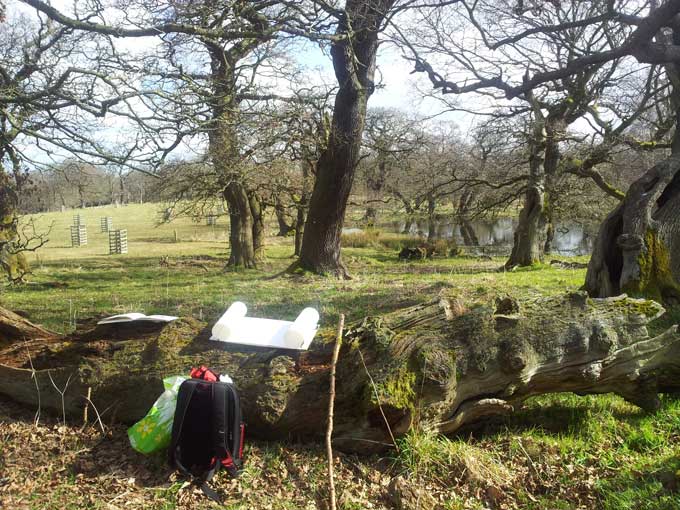 Settling on a spot to draw is hard when there are so many amazing trees to choose from, but I try to be strict with myself and just get drawing – they’re all good subjects. 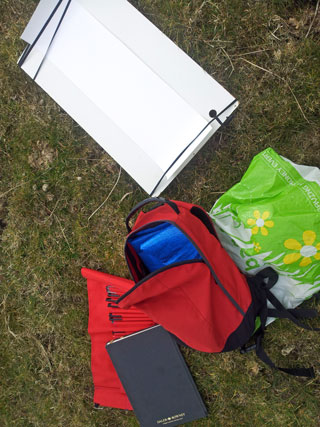 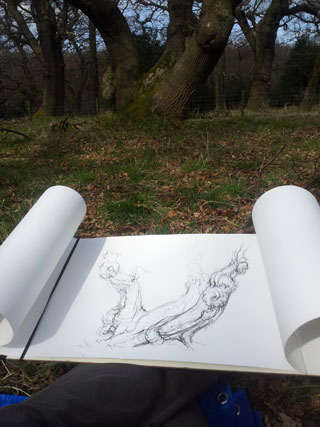 I make my drawings on a scroll of paper so that I can work on a decent sized piece but still transport it easily.  It does mean that I can’t see the whole drawing at once while I’m working, so there’s a kind of ‘consequences’ type of reveal when I’ve finished drawing from each angle. 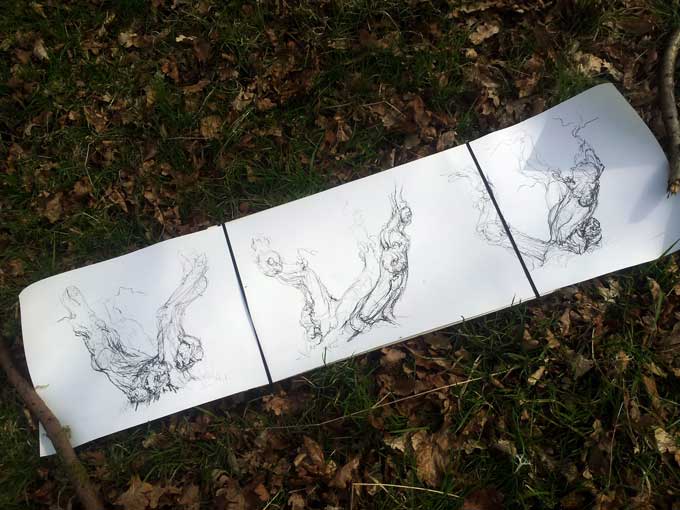 The finished drawing about to come off the board – I blow away any bugs so they don’t get rolled into it too. 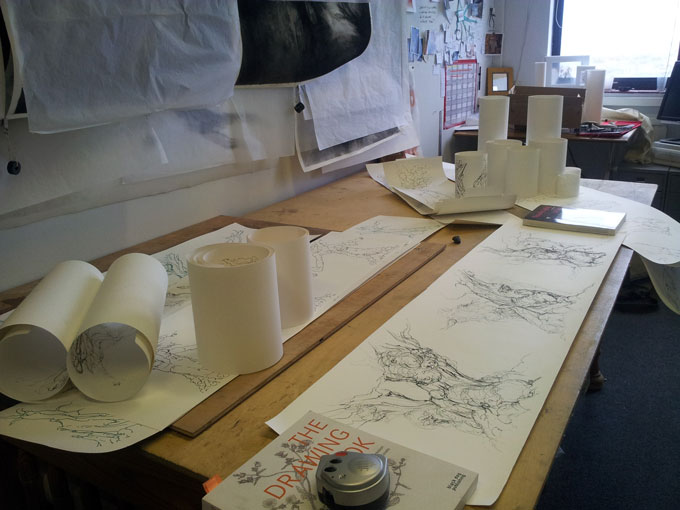 Going through them in the studio, reviewing old and new, noting what to work on next.

Like lots of artists I know, I can€™t resist buying new materials to try out and really enjoy choosing and handling them.  So it€™s inevitable that I end up with far too much stuff and have to make some decisions about what I really need to take with me when I€™m drawing outside, bearing in mind I€™ll have to carry it all myself.

Experience had taught me that less is definitely best and that restricting my choice of materials makes my trips more productive.  I€™ve also learned what works best in the wonderful Scottish weather and developed my own ways to cope with wind, rain, mud and occasional sunshine.

I recently had the luxury of staying in a cottage in the middle of a deer park so I was able to take more than usual – I could select a few things as the fancy took me and then stomp off over the field to draw, knowing I could nip back for something else if I changed my mind.  In other locations I need to plan more carefully as it€™s a longer walk to the trees.

My basic kit consists of: 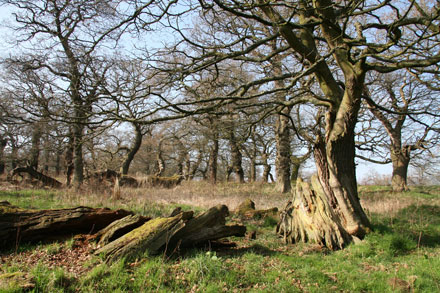 They don’t have to be recognised as ancient to be interesting to me, but areas which are known to have ancient or semi-ancient woodland or boundariy trees are often where I find the most variety and history.

Organisations such as the Ancient Tree Forum and the Woodland Trust are doing a fantastic job recording British woodland and campaigning to ensure it’s protection. The National Library of Scotland has all its old maps available online so it’s possible to see how long particular locations have been wooded for.

Find my locations on a map here. 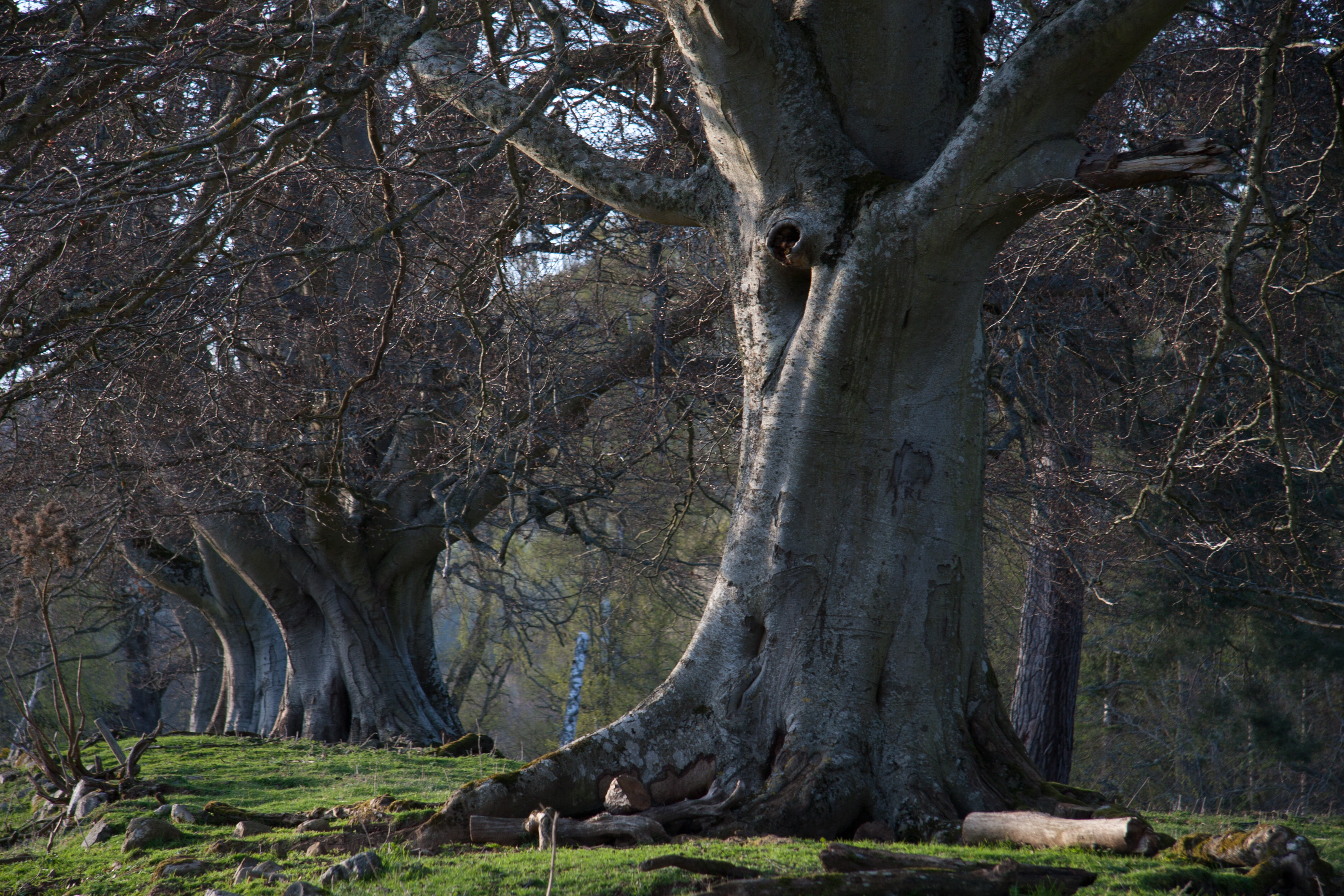 In three days time I’ll be back in this field, layered up with fleecy clothes, sketchbook in hand and feeling at one with the world.

The Novar estate near Evanton has been a family holiday destination for a few years now and it happens to have some fantastic old trees.  This is a really special row of veteran beeches on a bank in the deer park, which I drawn many times.  I’ve no idea how old they are but they have a magnetic quality that keeps me going back, however cold it is.

I only get one visit a year, so I’m busy packing my drawing and camera kit so I can make the most of the precious time.  Early spring is my favourite time for field drawing as the trees are stll leafless but there’s a feeling of potential and newness in the air.